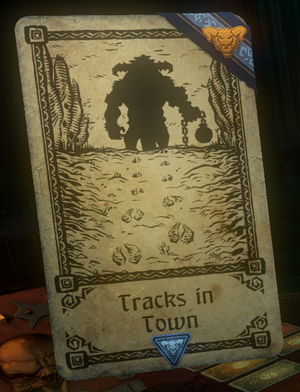 You're travelling through a quiet hamlet, at first it appears rural and quaint but as you move through it you realize that the lack of activity is due to disaster. A scene of great destruction reveals itself, you wonder army or force of nature besieged this place. You spot one villager retrieving their belongings from the pile of rubble that used to be their home. You call out to them.

The villager's head snaps round like a frightened woodland creature. "Are you quite mad? Such noise will only tempt the beast to return, can you not see that we've suffered enough". Upon further, quieter inquiry the villager tells you that a ghostly pale beast smashed through the town a few days before. It destroyed or devoured everything in its path before heading east out of town. "May the gods have mercy on any who cross its path" you cannot tell if that is warning or a prayer.

Startled, the villager flees immediately without even a glance in your direction. Perhaps thievery, not salvage was their motive. A cloud of fear hung in the air long after they disappeared into the nearby woods.

It is easy to track the carnage from town into the woods. However once there it becomes much more difficult, many animals and beasts travel here and their tracks cross and confuse.

The gigantic beast leaves tracks that are easy enough to follow.

A countless number of footprints, tracks and scratch marks create an incomprehensible mess that you cannot follow.

The smell hits you like (a) hammer's blow and twists your stomach into a knot. You've followed the track to a lair or den of some kind, this is where it feeds. Blood stains the broken ground where it mangles its prey. You wait in the shadows where you both hope for, and dread, its return.

You feel the ground tremble before you hear any sounds. Before long you can hear the forest giving way to the unimaginable force. Moments later the White Minotaur's gargantuan form explodes into view, clenching tonight's meal in its jaws. You ready your weapon for the fight but before you can react a musket blast rings out from another hiding spot. The shot narrowly misses, behind its eyes you can see it consider whether to fight or flee. As the Huntsman reveals himself the great beast roars. It turns tail, the huntsman in pursuit.

Perhaps the beast never returns to its feeding sites or it became aware of your spying. Either way your wait is uneventful and ultimately futile.

You burst from the brush to pursue the Huntsman as he chases the White Minotaur. Night has fallen since you arrived and the chase proceeds at a breakneck pace, it isn't long before you lose sight of both your quarries. They can however still be heard, most notably the Huntsman cries out "If you want to share this bounty then you'll need to pull your finger out!" You try and follow the sound of his voice.

Dashing through the trees you follow the Huntsman's voice into an underground structure. His voice continues to echo from inside and you delve deeper.

The sounds of the chase disappear into the night, leaving you alone in the darkness.

The Mug and Barrel

For tracking the White Minotaur, you receive:
Encounter: The Labyrinth