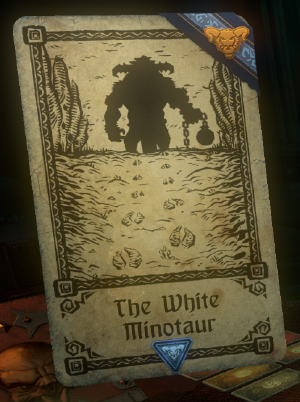 The next time you come across tracks for the White Minotaur you are surprised to also find tracks that may belong to the Huntsman. You follow the tracks to a nearby glade where you spot them locked in a duel to the death. The huntsman parries and rolls away from the minotaur's charge. They exchange blows, the Minotaur smashing down his mace causing sparks of arcane energy to shoot out. The Huntsman spots you out of the corner of his eye, for a moment, surprise flickers across his eyes. This moment is long enough to distract him, The White Minotaur smashes him to the ground with his weapon and gores him with one of his horns. The Minotaur roars in celebration before turning towards you. You ready yourself for combat.

(After Combat if token already acquired)

After defeating the White Minotaur, you take a trophy from your kill.
Acquire White Minotaur Mace.
That weapon will be hugely valuable to any trophy hunters.
The Collector is placed on the map.

(After Combat if token not yet acquired)