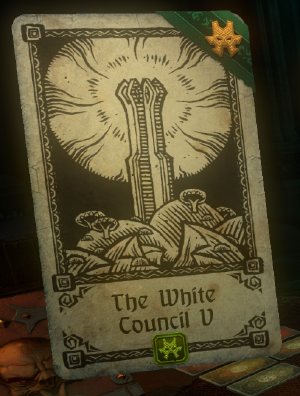 The mages of the white council have been mobilized.

Zahagan - if still alive - will be looking to take his revenge against you.

One day as you haggle with a grocer for some cheap food, you find yourself suddenly flying into the air. A vortex of wind surrounds you, propelling you up and away, towards an unknown destination. In time you are dumped onto a stoney platform before the wizard, Zahagan. He glares at you for a moment with a single eye, his other having been hideously scarred. "You have caused great harm to this land, warrior." "The council seeks only to ensure peace in this realm and you have sown chaos. Even now, the demon Abadeon still rages in the depths of the tower, the sacred temple of knowledge itself. It will take us years to recover." He gestures with a hand - now missing several fingers - and a portal opens, revealing a trio of mages. "Kill him," Zahagan says, limping through the portal.

(After combat)Zahagan suddenly reappears, furious and seething with magical energy. "Warrior, your skill with a sword has made you a great thorn in my side." He pauses to kick the body of a fallen mage. "Idiots! If not for me these simpletons would still be hiding in their tower, nothing more than a bunch of spineless librarians!" "Let's see you fight your way out of this!" A shield of magical green energy appears instantly around him, as he launches into a long and complicated pattern of sounds and gestures. A glowing light forms in the sky above you. "The devils take you!" Zahagan mutters, disappearing into another portal as the massive ball of fire plummets down. With no other way down, at the last second you throw yourself off the edge of the stoney platform. After falling for several seconds, a tentacle suddenly reaches out of a portal, plucking you from the air and bringing you back into the tower of the White Council. Abadeon the demon sits surround by the forms of fallen mages as it places you down lightly."You have been useful, mortal" a dozen mouths say. "And you will be useful to me again one day. Go now." The thing watches you with several unblinking eyes as you back out of the room. You scarcely pause to loot the abandoned rooms on your way out of the tower.