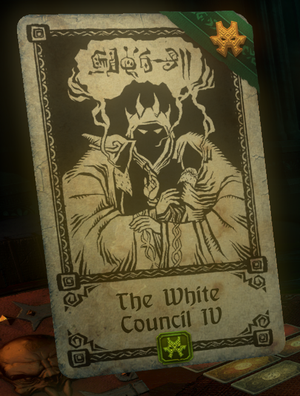 On a fine, sunny day, you set out into the forest, hidden in a barrel on the wagon of Tarrin the Merchant. Your destination is the White Council's stronghold. After what seems like hours, a deep voice calls out "Halt!".Tarrin yelps in surprise and the wagon stops. You hear Tarrin greet someone. "Ah, hello m'lord. I have your usual shipment here, nothing interesting to say about it." "Is that so?" the other voice remarks casually, before falling silent for some time. "Here is your payment", you hear the click of gold coins. There is suddenly a blinding white light. When your vision clears, you dare to look out from your place of concealment. You see that you and all the stock from Tarrin's wagon sits in the middle of a stone hall, on a circle of runes and symbols. A trio of poorly dressed goblins work to sort everything into a storage room to one side, under the gaze of a bored mage.

A goblin suddenly drops a barrel of apples, sending them rolling across the hall. You help yourself to some supplies while the mage berates the poor creature, before sneaking out a side door.

You manage to reach a shadowy alcove in which to wait for the goblins to complete their labours before leaving.

With a holler, one of the goblins spots you. The mage flicks his wand and the runes of the circle on the floor glow...You appear back on the path, somewhere in the forest. The White Council has avoided your righteous vengeance this day.

If Successful:
You soon discover the tower to be a sprawling maze of tunnels and rooms - many more than could actually fit inside the tower you've seen from a distance. You are inexplicably drawn to a bare stone chamber with an opening to the sky above. You watch as a magician summons into existence a huge scaled creature of claws teeth and tentacles. You feel dizzy watching it. It gnashes it teeth at the wizard, but backs away when he raises an ornately decorated skull. He addresses the creature, "You will go to the city of Kadere and kill the Duke." The creature hesitates, its unblinking eyes gazing in every direction at once. "How has he wronged you?" the creature's strange, hissing voice resonates from a dozen mouths, "Or is this more 'wisdom' from the benevolent council?" "He foolishly strives yo defy my will - as do you!" the wizard responds, holding the skull higher. "Go! I command it!" The beast retreats once more, saying "Beware Zahagan - the bones of my true master will not protect you forever. One day, you will slip and drop them, then I shall have you in my claws." "Your threats are hollow, demon, and only serve to delay your departure -" the mage stops and pauses. "What are you up to..." he mutters, then quickly looks around the room in alarm. His gaze comes to rest directly on you, hidden in the shadows.

You send your weapon flying across the room, crashing into the skull and knocking it to the floor. The mage looks from the fallen skull to you, and then to the beast. His mouth opens but before he can utter a word, a dozen tentacles descend upon him. A loud bell begins ringing throughout the halls. More robed figures appear from glowing portals to aid their leader. You flee the room as the sounds of fire, magic, and teeth do battle. Under the cover of the chaos you have sown, you manage to loot a magical artifact of some kind from an unoccupied laboratory before being spotted. "There's an intruder in the lab!" a magician calls from the doorway. No time for that now!" someone else yells, "Just expel it before it damages something important!" One of the magicians casts a spell and you find yourself standing in the forest, the tower far in the distance.

You rush from your place of concealment towards the skull bearer, but at the last moment crash into a magically summoned shield of green energy. "Eat him!" Zahagan yells. The creature sighs and grasps you with a dozen limbs. "You have failed us both, mortal."

You turn to flee the room but at a magical command from Zahagan an alarm bell begins to chime. Robed magicians begin popping out of portals all around you and in short order you are constrained by magic. "No sense wasting a live specimen, take him to the lab," Zahagan declares. "I believe Dazaroth wanted test subjects for his latest...experiments." You escape two weeks later, much poorer for your experiences in the tower.