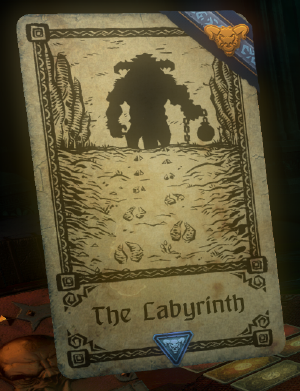 You follow the Huntsman's voice further into the stone structure, at first seemingly decrepit, signs emerge that it is still in use. Fresh torches hanging in sconces on the wall and you can make out a mess of footprints in the dust. Passageways splinter and twist away in every direction. "When I first started hunting the beast, I considered just that, a mindless animal with an unquenchable thirst for blood." The Huntsman's voice now appears to be coming from all around you. It fought, rampaged and devoured with seemingly no focus." "In time I came to discover that there was a meaning to the beast's madness. The White Minotaur is singular in its power but it pursues its own kind, much like I pursue it." The branching pathways of the labyrinth begin to confuse and disorientate you. "I cannot tell you to the why, whether it be for family or for food." The Huntsman's voice echoes weakly out of the dark as if now further away. "I shall not bore you with more of the details, it should suffice to say that this place makes the perfect trap. However a trap needs a lure and my problem is that my lure, is hungry." "Ol' Whitey didn't take the bait this time, but you are my consolation prize." Off in the dark you the scrape of steel and stone, followed by a blood curdling roar. "Just so I'm clear, I'm locking you in here with them. You did better than most but now we must part ways." You ready yourself for combat.

(After combat)After defeating the Minotaur, you become aware of more noises in the dark. Knowing that you cannot defeat more foes, your only optio is to try to escape the labyrinth. You tear through the maze in desperate bid to find the way out.

You think that you're seeing familiar territory as you dash through the maze.

You don't recognise anything you pass as you try to escape.

The door buckles against under your assault.

You bounce off the door with little obvious effect.
Draw 1 Health Pain Cards.

You bounce off the door with little obvious effect, hurting yourself in the process.
Draw 2 Health Pain Card.

If enough successess:
The hinges of the door finally give way under your assault. You burst out of the labyrinth and into the cold night and to your escape. You don't stop to notice that many Minotaurs escape into the wild.