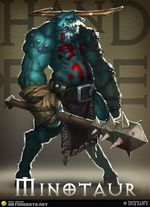 The Suit of Minotaurs is a special suit and not a member of the court. They are encountered when the player encounters the labyrinth card.

Minotaurs are a chore to defeat but not too hard if you are careful. They have two attacks, charging you, and attacking repeatedly with a massive flail. The easiest way to beat them is to wait for them to charge and side step it so they hit a wall. They will be stunned for a second so you can run in and hit them, but only hit them once and dodge roll away because they will immediately start attacking with the flail. Or hit them with a ranged ability, if you can.