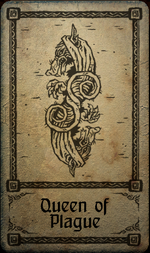 The Queen of Plague is the eighth Court boss in Hand of Fate, as well as a Monster Card which can be encountered normally after her defeat.

The Ratman Queen can birth thousands of her foul kind, protecting them with her prodigious spear skills.

King of Skulls
Fire in the Deep
Shop

The Queen of Plague is a fairly unique enemy. Her only attack has two parts. For the first, the throws an energy attack at the player. If the player is hit, they do suffer damage, 9 with light armour., also, they are pulled towards the Queen. When they get close enough, she attacks with her claws. The second part can be countered. She comes with some normal ratmen, and a plague totem. The totem will occasionally spew a foul substance at you, that coats the ground for a couple seconds. It has very short range. The totem appears to be a dead Plague Rat, tied down on their back, with plague festering from their stomach.

Simply keep your distance at first and deal with her minions. Once they are dead, try to draw her away from her totem. Finally take out the totem. The totem has very limited range, but watch it when you attack, and be careful to avoid its attack.