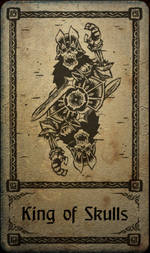 The King of Skulls is the ninth Court boss in Hand of Fate, as well as a Monster Card which can be encountered normally after his defeat.

The most fearsome undead warrior ever seen. He carries on one arm, a shield that would crush most men and the other, wields a two handed sword with deadly ease.

The king has a few attacks. His most devastating is a sort of beam attack that he performs with his shield. Unfortunately this power is lost when you acquire the shield.

Contrary to most other bosses, the best way to deal with the King is to stay fairly close to him. His shield attack damages everyone, so when he does it, stay behind him.