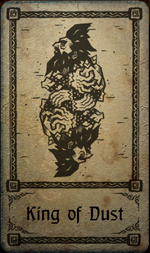 The King of Dust is the fifth Court boss in Hand of Fate, as well as a Monster Card which can be encountered normally after his defeat.

The King of Dust broke faith with king and country long ago, and has made himself rich and powerful through the judicious application of cruelty and terror, outside the law, for decades.

The king has three attacks. Two melee strikes, one which can be blocked, the other cannot be. For his other attack, he calls for three cannonballs to land where he directs them. Once the attack starts, the player has a few seconds before a red ring appears under their feet. The cannonballs will hit that spot. The ring does not follow the player after it forms. From time to time, he may power up himself and any remaining enemies in the area, for a few seconds. Being indoors does not effect this ability.

The easiest way to defeat the king is to keep your distance and avoid his attacks. Charge in every so often for a few hits before moving out of range. When he uses his cannon ball ability, it is a good idea to charge into the enemy, as the ability will hurt everyone, including himself. It is entirely possible to defeat the King of Dust doing just this, though it will take a long time.