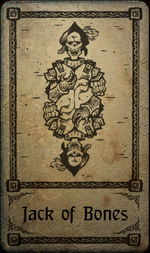 The Jack of Skulls is the second Court boss in Hand of Fate, as well as a Monster Card which can be encountered normally after his defeat.

Serving as captains to squads of lesser skeletons, these unholy abominations strike fear into the hearts of all warm-blooded folk. For until this fiend is defeated, their legions are, effectively, endless.

The Jack of Skulls is a larger-than-normal skeleton, armed with a sword and shield. He is accompanied by three other skeletons, two of which are armed with muskets, making them capable of unblockable ranged attacks. He behaves similar to ordinary skeletons, attacking and blocking as normal, but deals more damage than normal and has about twice as much health. When encountered as a court boss, he is accompanied by one additional card worth of monsters.

The Jack of Skulls is capable of resurrecting nearby defeated skeletons; he surrounds himself and the skeletons to be raised in a green glow. Multiple attacks are required to interrupt this ability.