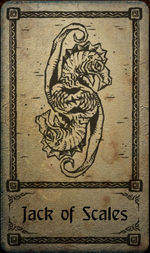 The Jack of Scales is the sixth Court boss in Hand of Fate, as well as a Monster Card which can be encountered normally after his defeat.

Note: His lore states that he nullifies weapon abilities and artefacts. This is not true, and they can be used against him in battle.

Their latent magical abilities mean these lizardmen are feared by all, even their own kind.

The Jack of Scales is a larger variation of the standard lizardman, except his attacks deal more damage. He has three attacks. A tail smash that cannot be blocked and strikes twice, damaging everyone, a tail swipe that cannot be blocked, and a sword strike that can be countered. The tail attacks are obvious and can be interrupted with a shield bash provided the player does it before the indicator appears.