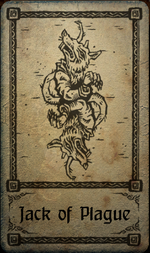 The Jack of Plague is the fourth Court boss in Hand of Fate, as well as a Monster Card which can be encountered normally after his defeat. He is the first Court fought after acquiring The Goblet.

Here is a beast who hates your kind, and has grown fat and evil with that hatred. The Jack of Plague will kill you and suck the marrow from your bones.

The Jack of Plague is a giant ratman that spawns alone. When fought as a boss, he is accompanied by 4 ratmen.

Surprisingly, the Jack of Plague does not hit all that hard and he doesn't have any more hit points than the Jack of Dust or the Jack of Bones. Like smaller ratmen, he has both a blockable and an unblockable attack. His special ability is to make other enemies around him attack more quickly when he is damaged, encouraging the player to either ignore him initially or kill him as fast as possible to deny his passive benefits to others. Like other ratmen, he releases a toxic cloud upon death.

The Jack of Plague's Court is significantly more difficult than previous Courts, despite the player's vastly superior starting gear. It is difficult to retain money due to the curse, meaning that all money should be spent as soon as possible (on equipment if nothing else), and the Court is considerably longer, even compared to the Queen of Dust's Court. The Angry Mobs are particularly troublesome due to their tendency to steal food; satiating a mob for good takes an enormous amount of food, but it is generally wise to pay up in favor of the damage that they can deal if they are denied.