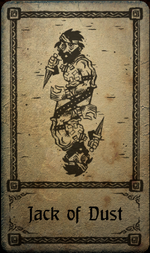 The Jack of Dust is the first Court boss in Hand of Fate, as well as a Monster Card which can be encountered normally after his defeat.

In the ruins of an ancient temple, among the eternally shifting sand dunes, lives the mysterious leader of the desert bandits. Infamous for his reign of terror over any spice caravans that dare take their chances travelling through his domain, he rules as a king over the barren lands.

The Jack of Dust is a larger-than-normal bandit, armed with a sword and accompanied by three other bandits. When encountered as a Court boss, he is accompanied by up to two additional cards worth of monsters. The Jack of Dust has about twice as many hit points as an ordinary bandit. At half health, he will power up, moving more quickly and dealing more damage.

When hit by Jack of Dust, the player loses 5 gold, inlcuding the knive throw.