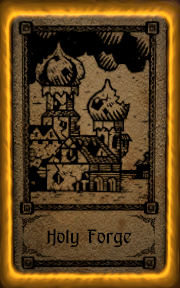 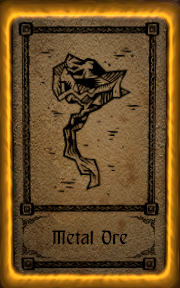 On a dusty, lonely plain you come across the shattered remains of an old Monastery. Searching through the building you meet an old man dressed in dirty robes.

As you traverse a particularly tricky trail across a mountain ridge you notice a dark ravine beneath you.

Holy Forge and Metal Ore are a pair of encounter cards that only function when both in the deck, with the exception of expansion cards like The Elder Lizard which also use Metal Ore. Both are safe spaces and it is highly recommeded to include them in the deck even though luck may put the two encounters on different floors in an order that makes them impossible to use properly. When the Metal Ore encounter is activated, the player can investigate to retrieve the ore. The ore does not appear in the inventory, but its presence changes the Holy Forge encounter. Taking the ore is safe. Ignoring it generates a new choice to exchange 1 food for a worthless (non-)item.

When playing the Iron Hunger fate: 75 ore can be used in place of encountering Metal Ore.

When encountered, retrieving the metal ore will add 75 ore when playing the Iron Hunger fate. It can also be given to The Elder Lizard to receive 4 gain cards. When given to the Alchemist he gives you a health potion.