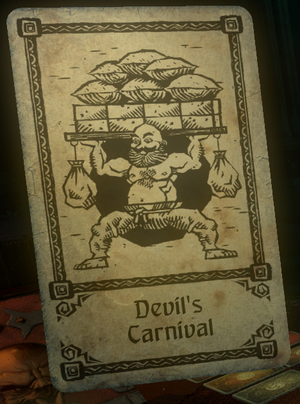 One day just, as dusk gathers, you reach a large country town hosting a traveling circus
Strange sights - and stranger smells - confront you, as you begin to wander between tents and stalls that were once brightly-coloured, but now are faded and stained with dust.
Peasants and nobles alike wander the streets and alleys, past wonders and amazements, seeming almost dazed.
There is something about the place that dulls your senses and, for a while, you forget your quest; forget even the path that brought you to this place.

Cheers and gasps draw you to a large tent.
Inside, you discover a number of spectacles being performed by costumed artists.

Along the back of the large tent you discover a row of cages. Strange creatures look at you mournfully through the bars. You stop at the sight of a beast with the body of a lion and a head of a man.
"Please help me!"the beast exclaims. "I was born a man, but then I came here - they did this to me!"
You open the cage and the beast jumps out, saying, "Bless you, stranger. I may live out my days as an animal, but at least I won't have to perform for those devils."

(No token) The man-beast turns and flees between the other cages, swiping at them in fury as he passes. Various other cage break open, releasing a number of unusual-looking beasts that fly away.

A strong man offers a magical item as a prize for anyone who can even lift half what he can. You take the challenge and, after a brief, but intense, effort, you accept the prize.

Unseen hands relieve you of some of your gold as you watch a fine white horse being commanded to perform a variety of tricks for the gawping crowd.

To one side, a pair of women dressed as devils periodically breathe fire into the air. One of them sneezes as you pass by, catching you in a burst of fire.

You drift along the various stalls and booths, stopping to look at whatever catches your eye.
The mysteries of the carnival await you.

You pass a stall that presents a wide variety of coloured vials, elixirs and potions for sale. A young woman sees your interest and gestures to a bright green mixture saying, with a thick accent, "Care to taste? It not cost gold." You take a sip of the liquid, then suddenly decide to drink down the entire bottle. After a moment, you feel refreshed and full of energy. "No, no," the woman says, waving away your coin, "I say, the price you pay not gold. You pay later."

You leave the stall, feeling fit but confused at the woman's cryptic words. What could the price be if not your gold?

The ringing of the bells heralds the approach of a jester. He raises a stick with a small jester head on the top and uses it to engage you in a mock sword-fight. He then pretends to be killed by you, making an appropriately dramatic death scene. The crowd boos at you and begins to throw food. You salvage what you can from the mess.

As you walk down an alley, you suddenly realise that the crowds have vanished. A small group of men approach you, clearly with bad intentions.

(After Combat) Immediately after the last man falls, the townsfolk begin to drift into the alley again, oblivious to the carnage. Somehow, the bodies are dragged back into the shadows and, within moments, it's as though nothing unusual happened.

You are selected from the crowd to be tied to a wheel. The wheel begins to spin and a blindfolded man dressed in black proceeds to throw knives at the wheel. Evidently, he needs more practice.

A black cat darts out and weaves between your legs. Distracted you take a wrong turn and wander down a darkened alley.
The mysteries of the carnival await you.

A muffled call for help brings your attention to a hall of mirrors. You stride inside, weapon in hand. In the reflected gloom, you can see some cloaked figures moving, but you cannot tell in which direction or how close they are. After some time, you come across a small, dark pool on the ground. A few coins lie scattered around, stained red with the blood of their previous owner.

You continue to make your way through the mirrors, but find no other signs of life until you rejoin the street crowds. As you walk away, you wonder what kind of thieves would take a person and leave their gold? Soon you are distracted and the incident slips from memory.

"Genuine unicorn tonic can cure any injury, whether from sword or claw!" a man calls, holding up a bottle. He suddenly slashes your arm with a knife, and as you open your mouth to protest he flicks the bottle, splashing some of the tonic on you.
You start to reach for your weapon, but then stop. The crowd leans in and watches as the wound closes before your very eyes.
"Made from genuine unicorn and seven secret ingredients - available here for only one night!"

The crowd surges forward to buy this miracle potion, and you walk on, smelling of ground-up unicorn horn, elvish blood, ratmen sweat and several other pungent odours you can't identify.

A flurry of movement surrounds you as a trio of acrobats tumble in circles around you. After a brief display of leaps and spins, they depart, leaving your pack a bit lighter.

You feel parched and decide to enter one of the local taverns. The bar-keeper gestures for you to sit down and you do so, with a vauge sense of unease. A drink is placed in front of you and you pick it up, then hesitate - the barkeep moves away to other customers, but seems to be watching you from the corner of his eye. You place the drink down. Suddenly the door slams shut and the patrons all rise from their places and turn to face you.

(After Combat) The sounds of battle still ring in your ears as you search the bodies. You exit the tavern, intent on leaving this accursed town.

Sensing a hidden malice about the place, you turn and try to find your way back out of town. You somehow lose your way and end up heading further into the crowds. The mysteries of the carnival await you.

You wander into a hall of curiosities. You pass rows of preserved bodies, some born mutants at birth, others simply creatures that you've never seen before. You continue to browse under their lifeless stares. Among ancient devices and broken trinkets, you come across the torn remnants of an enchanted map. Upon closer inspection, you realise it reveals some of the surrounding countryside.

The small tent of a fortune teller entices you to enter. Sitting opposite a shadowed old crone, you look into acrystal ball and see yourself in combat, some time in the future.

The vision continues long enough for you to see yourself struck down, your blood spilling out until you lie cold and dead. The old woman speaks with a thick accent, "Your future... yes?" You leave the tent feeling unsettled, as the woman wheezes out a laugh.

The wailing of a reed flute draws you to a man sitting before a large wicker basket. As you watch, the head of an impressively large snake rises, its forked tongue flicking at the air. Suddenly, the snake turns toward you and lashes out! You instinctively react, striking the creature in the head. The dead body thrashes around on the ground and the man leaps up. "Murderer!" the man cries "Curse you killer!" A crowd gathers as the man continues to yell, and you quickly walk away before more trouble starts.

A chill wind causes the lamps to flicker and, for a moment, the townsfolk pause... Then the music begins again and the merrymaking resumes. A gentleman with a large top hat and a pointed mustache, waving what appears to be a wand, invites you to join him on the stage. He gestures for you to get into a box that leaves your head and feet exposed. After, apparently, being sawn in half, you discover that you are, in fact, in one piece. You leave the stage to the applause of the gathered crowd, only to discover some of your equipment missing. Angrily, you turn back but the stage is empty.

Some time later, you find yourself standing at the edge of a forest, the sounds of the crowds behind you. Day is just dawning... but which day? Looking back, you see the ruined buildings of a country town, long-ago abandoned.

For freeing a victim of the Devil's Carnival, you receive:
Encounter: Giant Eagle
DLC Only: Gain Card: Good Fortune 20 gold